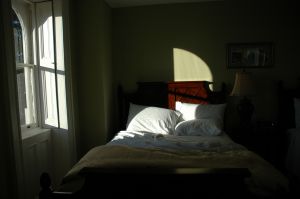 An old Irish man is lying in bed, very ill.  His son is sitting at his bedside, expecting the end to come at any moment. The old man looks up at the boy and says, "Son, it's time for you to get me a Protestant minister."

The son is astounded. "But, Dad!" he protests, "You've been a good Catholic all you life! You're delirious. It's a priest ye be wanting now, not a minister."

The old man looks up at him and says, "Son, please. It's me last request. Get a minister for me!"

The old man manages to croak out the words, "Son, if you respect me and love me as a father, you'll go out and get me a Protestant minister right now."

The son relents and goes out and gets the minister. They come back to the house, and the minister goes upstairs and converts him. As the minister is leaving the house, he passes Father O'Malley coming quickly through the door. The minister stares solemnly into the eyes of the priest. "I'm afraid you're too late, Father," he says. "He's a Protestant now."

Father O'Malley rushes up the steps and bursts into the old man's room. "Pat! Pat! Why did ye do it?" he cries. "You were such a good Catholic! We went to St. Mary's together! You were there when I performed my first mass! Why in the world would ye do such a thing like this?"

"Well," the old man says as he looks up at his dear friend. "I figured if somebody had to go, it was better one of *them* than one of *us*."