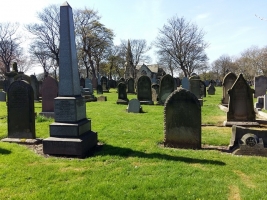 An elderly man took his little grandson for a walk around the local cemetery.

Pausing before one gravestone he said, "There lies a very honest man. He died owing me 50 dollars, but he struggled to the end to pay off his debts, and if anyone has gone to heaven, he has."

They walked on a bit further and then came to another grave.

The old man pointed to the gravestone and said, "Now there's a different type of man altogether. He owed me 60 dollars and he died without ever trying to pay me back. If anyone has gone to hell, he has."

The little boy thought for a while and then said, "You know, Grandpa, you are very lucky."

"Why?" asked the old man in surprise.

"Well, whichever place you go to, you'll have some money to draw on."