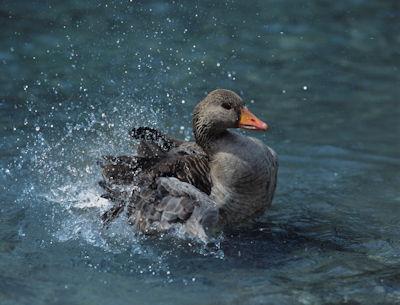 Three guys got into a car crash and all died. When they got up to heaven and met St. Peter at the gates, Peter said, "Okay everyone can come in, but whatever you do don't step on a duck."

The gates opened and they saw there were ducks everywhere; all over the ground, on tabletops, on the gold paved streets - everywhere!

The first guy walked in and immediately stepped on a duck. St. Peter came over and handcuffed him to an extremely ugly woman. He said, "Now you must stay handcuffed for all eternity." The other two saw this and resolved to do their best to avoid the ducks.

The second guy went months and months without stepping on a duck. Then one morning he woke up and as he was getting out of bed he stepped on two ducks. St. Peter entered the room and handcuffed him to a very homely woman and said, "Now you must stay handcuffed to each other for all eternity."

The third guy went years and years, never stepping on a duck in all that time. Then one day St. Peter came along and handcuffed him to the most beautiful woman he had ever seen. St. Peter said, "Now you must stay handcuffed to each other for all eternity."

The guy happily said, "Wow, what have I done to deserve this!"

The beautiful woman said, "I don't know what you did, but I stepped on a duck."