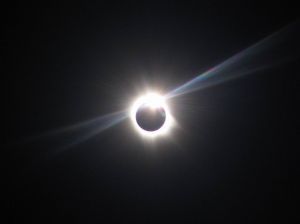 An astronomer was on an expedition to Darkest Africa to observe a total eclipse of the sun, when he was captured by cannibals. The eclipse was due the next day around noon. To gain his freedom he planned to pose as a god and threaten to extinguish the sun if he was not released. The timing had to be just right. So, in the few words of the cannibals' primitive tongue that he knew, he asked his guard what time they planned to kill him.

The guard answered, "Tradition has it that captives are to be killed when the sun reaches the highest point in the sky on the day after their capture, so that they may be cooked and ready to be served for the evening meal."

The guard continued, though, "But because everyone is so excited about it, in your case we're going to wait until after the eclipse."