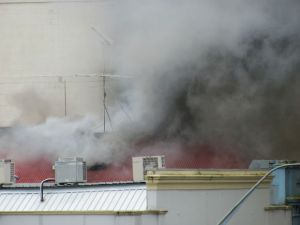 During a recent ecumenical gathering, a secretary rushed in shouting, "The building is on fire!"

The Methodists gathered in the corner and prayed.

The Baptists cried, "Where is the water?"

The Quakers quietly praised God for the blessings that fire brings.

The Lutherans posted a notice on the door declaring the fire was evil.

The Roman Catholics passed the plate to cover the damage.

The Jews posted symbols on the door hoping the fire would pass.

The Congregationalists shouted, "Every man for himself!"

The Fundamentalists proclaimed, "It's the vengeance of God!"

The Episcopalians formed a procession and marched out.

The Christian Scientists concluded that there was no fire.

The Presbyterians appointed a chairperson who was to appoint a committee to look into the matter and submit a written report.

The secretary grabbed the fire extinguisher and put the fire out.