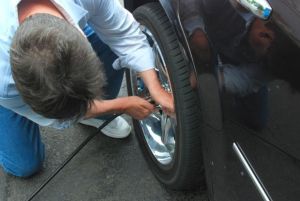 A motorist had a flat tire in front of an insane asylum. He took the wheel off, but when he stood up he tipped over the hubcap containing the bolts, spilling them all down a sewer drain.

A patient, looking through the fence, suggested that the man take one bolt from the remaining three wheels to hold the fourth wheel in place until he could get to a service station.

The motorist thanked him profusely and said, "I don't know why you are in that place."

The patient said, "I'm in here for being crazy, not for being stupid."