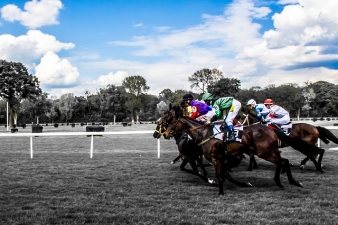 A Rabbi is walking slowly down the street when a gust of wind blows his hat from his head. The hat is being blown down the street, but he is an old man and can't walk fast enough to catch the hat. Across the street a Gentile sees what has happened and rushes over to grab the hat and then returns it to the Rabbi.

"I don't think I would have been able to catch my hat," said the rabbi.  "Thank you very much."

The rabbi then places his hand on the man's shoulder and says, "May God bless you."

The young man thinks to himself, "I've been blessed by the rabbi, this must be my lucky day!" So he goes to the racetrack and in the first race he sees there is a horse named Stetson at 20 to 1.  He bets $50 and sure enough the horse comes in first.

In the second race he sees a horse named Fedora at 30 to 1, so he bets it all and this horse comes in first also.

Finally at the end of the day he returns home to his wife. When she asks him where he's been, he explains how he caught the Rabbi's hat and was blessed by him and then went to the track and started winning on horses that had a hat in their names.

"I lost it all in the ninth race.  I bet on a horse named Chateau and it lost."

"You fool, Chateau is a house, Chapeau is a hat!"

"It doesn't matter," he said, "the winner was some Japanese horse named Yarmulka."