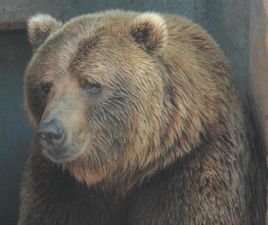 In the middle of a forest, there was a hunter who was suddenly confronted by a huge, mean bear. In his fear, all attempts to shoot the bear were unsuccessful.  Finally, he turned and ran as fast as he could.

The hunter ran and ran and ran, his lungs burned for lack of oxygen, his heart pounding so hard he felt like it would burst out of his chest. Then suddenly, he ended up at the edge of a very steep cliff.  His hopes were dim.  Seeing no way out of his predicament, and with the bear closing in rather quickly, the hunter got down on his knees, opened his arms, and exclaimed, "Dear Lord!  Please give this bear some religion!"

The skies darkened, and there was lightning in the air. Just a few feet short of the hunter, the bear came to abrupt stop, and glanced around, somewhat confused.

Suddenly, the bear looked up into the sky, knelt and said, "Thank you, Lord, for this food I'm about to receive..."