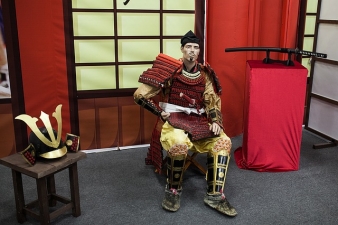 Back in the time when the Samurai were important, there was a powerful emperor who needed a new chief Samurai, so he sent a declaration throughout the land that he was searching for the very best.

A year passed, and only 3 people showed up for the trials: a Japanese Samurai, a Chinese Samurai and a Jewish Samurai.

The emperor asked the Japanese Samurai to demonstrate why he should be the Chief Samurai.

The Japanese Samurai opened a match box,and out flew a bumblebee. Whoosh! went his razor sharp sword, and the bumblebee dropped dead on the ground in 2 pieces. The emperor exclaimed: "This is most impressive!"

The emperor then issued the same challenge to the Chinese Samurai.

The Chinese Samurai also opened a match box, and out buzzed a fly. Whoosh, Whoosh! went his great flashing sword, and the fly dropped dead on the ground .....in four small pieces.

The emperor exclaimed in awe: "That is really VERY impressive!"

Now the emperor turned to the Jewish Samurai and asked him also to step forward and demonstrate why he should be the Head Samurai.

The Jewish Samurai also opened a match box, and out flew a small gnat.His lightning quick sword went Whooooosh!  Whooooosh!  Whoooosh!  But the tiny gnat was still alive and flying around. The emperor, obviously very disappointed in this display, said: "I see you are not up to the task. The gnat is not dead."

The Jewish Samurai just smiled and said: "Circumcision is not meant to kill."