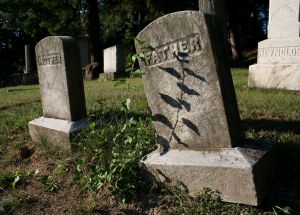 Hope these old tombstone epitaphs are still funny to you.

Harry Edsel Smith of Albany, New York:
Born 1903-Died 1942
Looked up the elevator shaft to see if the car was on the way down.
It was.

In a Thurmont, Maryland, cemetery:
Here lies an Atheist
All dressed up And no place to go.

In a Ribbesford, England, cemetery:
Anna Wallace:
The children of Israel wanted bread,
And the Lord sent them manna.
Old clerk Wallace wanted a wife,
And the Devil sent him Anna.

In a Ruidoso, New Mexico, cemetery:
Here lies Johnny Yeast.
Pardon me For not rising.

In a Uniontown, Pennsylvania, cemetery:
Here lies the body of Jonathan Blake.
Stepped on the gas
Instead of the brake.

In a Silver City, Nevada, cemetery:
Here lays The Kid.
We planted him raw.
He was quick on the trigger
But slow on the draw.

A lawyer's epitaph in England:
Sir John Strange.
Here lies an honest lawyer,
And that is Strange.

John Penny's epitaph in the Wimborne, England, cemetery:
Reader, if cash thou art In want of any,
Dig 6 feet deep;
And thou wilt find a Penny.

Another epitaph from England (thanks John Blasdale):
Here lies the body of Edwin Grey
Who died enforcing his right-of-way.
He was right, right, right as he drove along,
But he's just as dead as if he'd been wrong.

In a cemetery in Hartscombe, England:
On the 22nd of June,
Jonathan Fiddle Went out of tune.

Anna Hopewell's grave in Enosburg Falls,Vermont
Here lies the body of our Anna -
Done to death by a banana.
It wasn't the fruit that laid her low,
But the skin of the thing that made her go.

From a hypochondriac's grave in Key West, Florida (Thanks Chief Anderson):
I told you I was sick.

On a grave from the 1880s in Nantucket, Massachusetts:
Under the sod and under the trees,
Lies the body of Jonathan Pease.
He is not here, there's only the pod.
Pease shelled out and went to God.

In a cemetery in England:
Remember man, as you walk by,
As you are now, so once was I.
As I am now, you soon will be.
Prepare yourself and follow me.

To which someone replied by writing on the tombstone:
To follow you I'll not consent
Until I know which way you went

Last add, from Boot Hill, in Tombstone, Arizona:
Here lies Lester Moore
One slug from a 44
No Les
No More