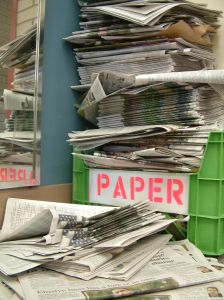 Thirty-five year study proclaims diet and exercise is the key to weight loss.

Upcoming NFL draft likely to focus on use of mutants.

Microsoft announces it has perfected its newest version of Windows so it crashes BEFORE installation is completed.

New California law requires that all nail clippers, screwdrivers and baseball bats be registered by January 1, 2031.

E-mail messages, like this one, now charged at $5 per word.  Please remit.