“[Paul’s letter to the Galatians] gives direction in the nature of God’s gift of freedom – most necessary guidance, for freedom is a delicate and subtle gift, easily perverted and often squandered.”  Eugene Peterson

This post continues the story from Time of Crisis.

“Jesus teaches marriage is sacred and of Divine origin.  ‘One flesh’ involves the unity of the whole person: purpose, physical, and life—a unity whereby the two become a new, God-designed, balanced life. They counterbalance each other's strengths and weaknesses.”1 It is designed to be beautiful, and yet most of the marriages I see are rocky to say the least.  There’s not a lot of beauty.  So what are we missing?  Why are marriages so difficult?

I was talking to a friend whose marriage had recently ended and told her that from my experience, marriage was very difficult.   She whole-heartedly agreed!  I was completely taken aback when an acquaintance in overhearing our conversation interjected that she begged to differ.  I was intrigued.  She is about my age, is the mother of 4 lovely girls, her husband works in a bakery.  Did she really find marriage to be not difficult?  She said that before she and Wayne married, God had taken her “out behind the woodshed” and gotten everything straight for her.  Hmmm…  I wasn’t quite sure what that meant.  But good to know there was at least one woman on the planet whose experience was different.

So here were Tim and I back in a terrible place – difficult was an understatement – I was despondent.  We talked some more that horrible night, but came to realize that we were at an impasse.  Neither of us could do what the other needed to be done.  It was about much more than spending at this point.  The night ended with Tim basically saying that he would just have to settle for mediocrity and scale back all his expectations for life in marriage.  I had experienced life like never before in the previous 5 months; I knew this was not God’s answer.   And if you know Tim, you’ll know that if there’s one thing that Tim does extremely well, it is living life – living large.  I was completely heart-broken, drowning in hopelessness.  All I could hear was failure – failure for us; failure for me.  I distinctly remember the phrase , “If only I weren’t so damned independent” repeating over and over again in my mind.  On that note, we went to bed.  I cried until I eventually fell asleep.

The next morning it all came flooding back!  Tim was already downstairs on the computer, so I showered and continued to cry.  And I prayed.  Father, you’re the Author of Life and now it seems our only hope is to give up on real life in our marriage.  Our only option is to settle for mediocrity – to cohabitate.  It’s so much less than you say there is in marriage, but we can’t find our way out of this impasse we’ve been in for so many years.

I believed marriage was designed to be beautiful, yet this wasn’t our experience.  We’d seen glimpses of it, but nothing long term.  What was I missing??

And then there in the shower, like the tiniest sliver of light far, far away – a single thought.  You could submit. 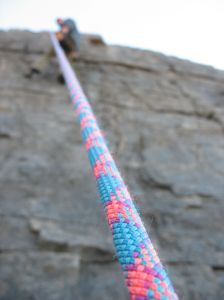 Remember that punch in the gut from December?  This was no punch; this was a very dubious life-line.  It wasn’t a ‘must do;’ it was offered from a hand of love as an invitation.  As I considered the notion I could easily admit that I had never done it, and I knew it was in His word.  It was as if God were prying my fingers off a broken toy, so He could give me what I really longed for.  But oh, my fingers were clamped on tight!  OK Father, I can see I’ve never obeyed You there, but do You remember it’s completely impossible for me! There is nothing in me that is capable of submitting to anyone for long.

You’ve submitted to Me these last 5 months.

Yes Adonai, but You’re good and trustworthy and Your love continues to boggle my mind.  Besides that You’re my Creator, my Redeemer and my Lord – You own my submission.

Then trust Me here too.  Submit to Me by submitting to your husband.

But I’ll be so vulnerable.  What if he takes advantage of that submission?  What if he asks me to do things that I hate or can’t do? I can’t be one of those mousey wives who are always at their husband’s beck and call!  I hate that!  That’s when abuse happens!  I’m too independent to kiss my brain good-bye!  I want to be able to think for myself!

Jesus submitted.  He chose to.

You’ll have to trust Me.

… Father… this is harder for me than forgiving Mr.Goodall for all those years of abuse…

And so, there in the shower, not even certain of what this submission was going to look like, absolutely certain I would fail before lunchtime, in my heart I chose to obey God by choosing to submit myself to my husband.  I was terrified.  I cried.  I dried myself off, got dressed and went downstairs to speak to Tim before I lost my nerve.

He was sitting at the computer and barely looked up when I stood in the doorway.  The iciness and hurt were palpable.  “So I have an idea of something that I’m going to try for awhile.  I don’t know if it will make any difference at all but I think it’s worth trying just the same.”

Before I could even think I said, “No.”  Oh great.  I’ve already messed it up.  What was that? Two minutes??  “Let me just try this for 2 weeks, and we’ll see if it does anything at all.  I’ll tell you what it is in 2 weeks.”  I had to have some room to just do it without any expectations on his part, and without any opportunity for him to take advantage of it.  I also needed room to fail, which I was certain I would, without him knowing how disastrous it was.

There wasn’t any hope in his response.  “Sure.  Whatever.”

We had no idea then, but the greatest adventure of our marriage had just begun.