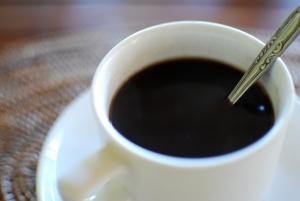 A sweet little boy surprised his grandmother one morning and brought her a cup of coffee. He made it himself and was so proud. He anxiously waited to hear the verdict on the quality of the coffee.

The grandmother had never in her life had such a bad cup of coffee, and as she forced down the last sip she noticed three of those little green army men in the bottom of the cup.

She asked, "Honey, why would three little green army men be in the bottom of my cup?"

Her grandson replied, "You know grandma, it's like on TV, 'The best part of waking up is soldiers in your cup.'