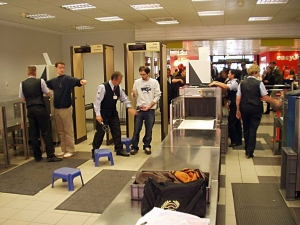 On a business trip, my father approached a security checkpoint at the airport. The National Guard shift was rotating, and a guard, in full uniform, was in line in front of him.

As with everybody else, the soldier was ordered to go through the metal detector. So, as he did so, he handed his M-16 rifle to security personnel along with other items such as handcuffs and a flashlight.

Still, the alarm sounded when he walked through. Further inspection revealed a little Swiss army knife inside one of his pockets.

"Sorry, Sir, but this item is prohibited," security said to the soldier.

Then, taking the knife away, the airport worker handed him back the M-16.