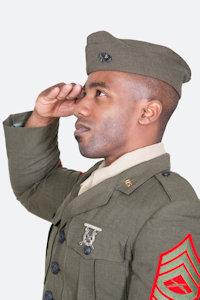 When my best friend James came home on his first Army leave, my little brother asked him what he did in the service.

"I do calisthenics, shoot guns and follow orders," James replied.

Walking in town that day, James and I ran into a buddy who also asked him what he did in the Army. James gave the same reply:

A while later, we met a former classmate, an attractive woman, and she asked the same question. This time, James said,