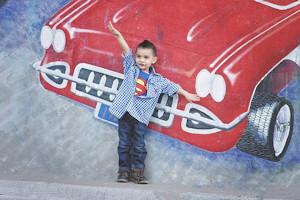 At his request, each morning three-year-old Ray's mother pinned a bath towel to the back shoulders of his size two T-shirt. Immediately in his young imaginative mind, the towel became a brilliant magic blue and red cape. And he became Superman.

Outfitted each day in his "cape," Ray's days were packed with adventure and daring escapades. He was Superman. This fact was clearly pointed out when his mother enrolled him in a kindergarten class. During the course of the interview, the teacher asked Ray his name.

"Superman," he answered politely and without pause.

The teacher smiled, cast an appreciative glance at his mother, and asked again, "Your real name, please."

Realizing the situation demanded more authority, or maybe to hide amusement, the teacher closed her eyes for a moment, then in a voice quite stern, said, "I will have to have your real name for the records."

Sensing he'd have to play straight with the teacher, Ray slid his eyes around the room, hunched closer to her, and patting a corner of the frayed towel at his shoulder, answered in a voice hushed with conspiracy,