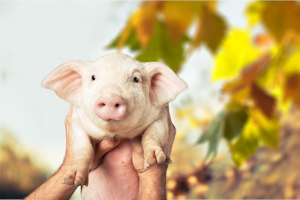 A man was on a long walk in the country. He became thirsty so decided to stop at a little cottage and ask for something to drink.

The lady of the house invited him in and served him a bowl of soup by the fire. There was a wee pig running around the kitchen, running up to the visitor and giving him a great deal of attention. The visitor commented that he had never seen a pig this friendly.

The housewife replied: "Ah, he's not that friendly. That's his bowl you're using."