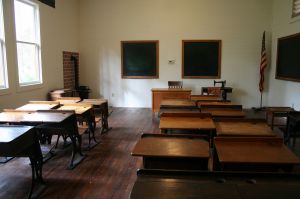 Tommy had reached school age. His mother managed with a blast of propaganda to make him enthusiastic about the idea. She bought him lots of new clothes, told him of the new friends he'd meet and so on.

Came the first day, he eagerly went off and came back home with a lot of glowing reports about school.

Next morning when she woke him up, he asked "What for?" She told him it was time to get ready for school.