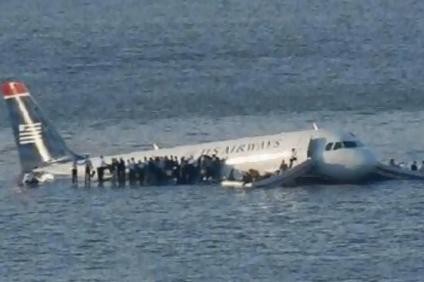 US Airways violated Federal migratory bird regulations by hunting geese with an A320 Airbus jetliner, claim anonymous government sources.  The pilot of flight 1549, Air Force veteran and avid hunter Chesley B. Sullenberger, tried combining both of his interests by bagging a brace of geese over the wetlands near New York's LaGuardia airport after takeoff, on his way to Charlotte, North Carolina.

The imported European $77 million A320 airliner is not certified for either waterfowl or upland bird hunting, so it was not surprising that the aircraft malfunctioned.  When he realized that both New York and New Jersey State Game and Fish enforcement officers would soon be approaching, Captain Sullenberger unsuccessfully attempted to hide the plane in the Hudson River.

The crew and 150 passengers were chilled and shaken but unhurt. Most were simply grateful to avoid spending the weekend in Charlotte.

National Transportation Safety Board inspectors rushed to the scene, and reportedly found no Duck Stamps on the downed aircraft's fuselage.  Captain Sullenberger has not been charged, but is being held incommunicado at an undisclosed location.

PETA is urging the government to prosecute the pilot for double honkercide and poaching, and the animal rights group is expected to file a civil suit on behalf of the flock.  The two victims were undocumented aliens, according to sources close to the investigation, Canada geese who had over-stayed their visas.  Their goose gang scandalized their quiet Queens community by squatting in local cemeteries and golf courses, parking on the grass, cooking strange-smelling food and throwing wild parties late into the night.  Neighbors say police dogs were called out on several occasions.

Such incidents have triggered a wave of anti-Canada goose sentiment, but at this time revenge or hate crime motives are not suspected in the US Airways bird bashings.

Forensic examination of the avian corpses continues, and technicians are analyzing the two cadavers under heat with chestnuts, prunes, and Armagnac. NTSB inspectors have contributed a supply of testing fluid, a 2005 Zind-Humbrecht Riesling from Alsace .  We will update this story as entrees details become available.