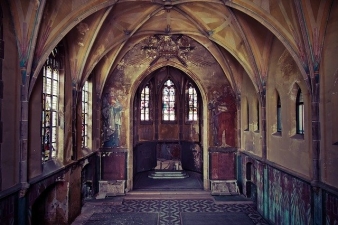 Outside a small Macedonian village a lone Catholic nun keeps a quiet watch over a silent convent. She is the last caretaker of this site of significant historical developments, spanning more than 2,000 years.

When Sister Maria Cyrilla of the Order of the Perpetual Watch dies, the convent of St. Elias will be closed by the Eastern Orthodox Patriarch of Macedonia. However, that isn't likely to happen soon, as Sister Maria, 53, enjoys excellent health. By her own estimate, she walks 10 miles daily about the grounds of the convent, which once served as a base for the army of Attila the Hun.

In more ancient times, a Greek temple to Eros, the god of love, occupied the hilltop site. Historians say that Attila took over the old temple in 439 A.D., and used it as a base for his marauding army. The Huns are believed to have first collected and then destroyed a large gathering of Greek legal writs at the site. It is believed that Attila wanted to study the Greek legal system and had the writs and other documents brought to the temple. Scholars differ on why he had the valuable documents destroyed - either because he was barely literate and couldn't read them, or because they provided evidence of a democratic government that did not square with his own notion of "rule by an all-powerful tyrant”.

When the Greek church took over the site in the 15th century and the convent was built, church leaders ordered the pagan statue of Eros destroyed, so another ancient Greek treasure was lost. Today, there is only the lone sister, watching over the old Hun base. When she goes, that will be it.