In praise of crazy 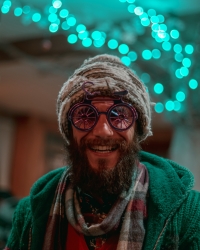 I made a mistake the other night of complaining out loud. It is one thing to complain under your breath so that nobody hears you or knows what you are complaining about. But when you complain out loud, then you run the chance of somebody hearing you.

The somebody I was most concerned about was the Gracious Mistress of the Parsonage. Some things are meant to be kept to yourself and for obvious reasons.

For some reason, who knows what it was, I let my guard down and vocalized my complaining. I must confess that it rather caught me off guard.

"What are you complaining about," my wife said, directing the question to me.

At first, I did not know what she was talking about because I did not realize that I was vocalizing my complaints.

All I could say at the time was, “Did I say that out loud?”

My wife has a delicate way of backing me in a corner where I have to say what is on my mind. Fortunately, I do not have much of a mind for anything to get on. Unfortunately, my tongue is not attached to anything, and so it is loosey-goosey.

What I was complaining about were all the crazy people, particularly on television. Just when you think you have seen the craziest thing, something or someone else takes the lead in the race to crazyville.

Since my wife asked me, I let go on a very eloquent rant against crazy. At this point, I forget the exact crazy that set me off. But it does not matter. If it were not one thing, it would be another thing. I have tried throughout my life to be an equal crazy complainer. If you are crazy, you can be sure I am going to complain about you.

“You, in particular,” my wife was directing this toward me, “ought to be quite thankful about all the crazy people in the world.”

That set me off on another rant. I am not thankful for the crazy people in this world. The less crazy people, the better I am going to like it. And I made the mistake of telling her exactly what I thought about that. We do not need more crazy people, I argued. Someone in Congress ought to pass a law against crazy.

While I said that, it occurred to me that most of the crazy people are in Congress.

I do not want more crazy people in this world. Enough is enough already, move on.

“Really,” my wife argued, “you ought to be happy about all the crazy people in the world.”

At this point, I was tempted to direct my complaining toward her. But you know what that would mean, and so do I.

I finally broke down and asked her what in the world she was talking about.

One thing I have learned throughout the years of marital bliss is, if you ask your wife to tell you something, she will do it. But I was desperate and needed a little bit of clarification.

She looked at me, paused as if she was collecting her thoughts, then said, "You should be thankful there are so many crazy people out in the world. The more crazy people there are, the more you are going to fit in. If for some reason, we could eliminate all the crazy people in the world, you would be a very lonely person."

She continued her explanation by saying, "Every crazy person takes the focus away from you. If there were not enough crazy people out in the world, people would focus on you, complaining about how crazy you are."

You do not have to hit me over the head with a hammer. That is the thing about my wife. When she is right, she is right.

At least it gave me a new perspective on the world around me. Also, a new appreciation for crazy. I began to see her point of view, as humbling as it was, and realize that crazy has a place.

As I further thought about this, I began to realize everybody is crazy only in different areas of their life. Some people’s crazy is more noticeable than others are, but everybody has that crazy gene. I guess that is what makes us human.

After some deep reflection on the subject, I have come to the point where I want to praise crazy. I never thought of it along this line, but everybody has the right to change his or her mind about anything. Personally, I would like to change my mind for one that really works. When I find one that’s exactly what I’m going to do.

One man’s crazy is another man’s delight. What is crazy to one person may be something rather important and enjoyable to another. After all, who am I to say what is crazy and what is not crazy. It is important to find someone else with something that you can truly appreciate.

I thought about that and what Solomon said, “Be not wise in thine own eyes: fear the LORD, and depart from evil. It shall be health to thy navel, and marrow to thy bones” (Proverbs 3:7-8).

Instead of spending so much time complaining about other people, I need to exercise the fine art of appreciation and learn how to praise people on their terms.