Tell Santa I Tried To Be Nice 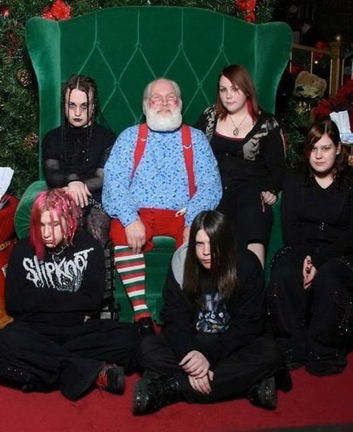 It’s that time of the year when the conversation around the dinner table in the Parsonage has to do with naughty or nice.

I must admit it's not my favorite conversation because what is naughty, and what is nice? That all depends on who you're talking to. The Gracious Mistress of the Parsonage has a different definition of these words than I do.

I'm afraid I have to disagree with this because as far as I'm concerned, nice has to do with Apple fritter and naughty has to do with broccoli. I'm not sure that you can get any naughtier than broccoli.

But this time of the year, the definition of naughty and nice is determined by some overweight guy living in the North Pole abusing reindeer. If you think I'm going to listen to his definition, you don't know me.

I don't want Santa to determine if I'm naughty or nice because I don't trust that guy.

As a husband for almost half a century, I know a trick question when presented to me. I can't tell you how many times I have been tricked with one of these questions.

“Well,” I stuttered, “how do you think I fared during the year?”

Throughout life, I have learned that it is not what I think that really matters but what other people think particularly about me. It's not if I think I was nice this past year, but did my wife think I was nice.

Looking very thoughtfully as she usually does when interrogating me, she said, “Well, there was that incident at the beginning of the year about a lizard on my pillow.”

It was all I could do to hold back a chuckle. I remember that incident very well in a motel over in St. Augustine. I still can see that lizard staring at my wife.

“You have to admit,” I explained, “that lizard was rather a nice little critter.”

“If that’s your definition of nice,” she said most adamantly, “then you have failed the test.”

I wouldn’t say this out loud so that she could hear me, but that was one test I enjoyed failing.

After pausing for a moment or two, she said, "Then there’s the incident about the bug on my leg while I was driving."

Although I tried to withhold any outward expression of laughter, it was beyond my control.

"So, you think it was nice for that bug to be on my leg, causing me to bump into the car in front of me?"

I had almost forgotten that, but nobody was hurt in the incident.

“What does nice have to do with that kind of bug on my leg?”

Then, much to my surprise, she broke out laughing as well.

To some people, what is nice is not nice to other people. What is naughty is not necessarily naughty in someone else's estimation.

All these things she brought to my attention was not something I worked at. It was something that came without any influence on my part. My part was laughing at the incident and enjoying it for weeks to come.

As the room quieted down, I finally raised my question.

The tables were turned now, and I wanted to press her with some of my interrogations.

I’m not a very good interrogator, particularly when it comes to issues concerning my wife. But I thought since she brought up the subject, I would carry it through and see where it took us.

She stared at me for quite some time and then said, “I think I have been overly nice because I have given you so much material to write about.” Then she glared at me with one of “those glares.”

First, I didn't quite know how to take it. I was afraid that her NICE was turning into her NAUGHTY, and I would not be able to handle that.

Following a few silent moments, she then burst out laughing. I was relieved, to say the least.

We enjoyed a few moments of shared laughter, which greatly lightened up our day. As I was thinking about it, there was another nice aspect of our relationship.

That nice aspect is, my wife is not a writer, or I would be in trouble.

Later that day, I thought of the Bible verse. “But if we walk in the light, as he is in the light, we have fellowship one with another, and the blood of Jesus Christ his Son cleanseth us from all sin” (1 John 1:7).

Our relationship is not based on nice or naughty but rather on the Lord Jesus Christ, our Savior.