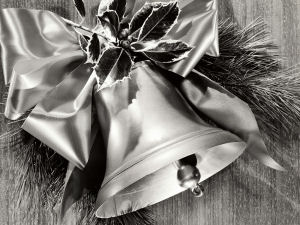 The war in Europe was only four months old, yet it had already reached a savagery unknown until that time. After the initial success of the German army, the war became a desperate trench struggle with a very high casualty count. The promise of early success seemed like a faraway dream. The snow and the cold of 1914 made things even worse, but as the darkness fell on Christmas Eve something happened that would never occur again.

Sir Edward Hulse, a 25-year-old lieutenant, wrote in his diary about this strange occurrence.

"A scout named F. Marker went out and met a German Patrol and was given a glass of whiskey and some cigars, and a message was sent back, saying that if we didn't fire at them they would not fire at us." That night, where the fighting only five days earlier had been fierce, suddenly just stopped.

The following morning, Christmas day, German soldiers walked towards the British lines while the British came out to greet their enemy. They exchanged souvenirs with each other and the British gave the German soldiers plum pudding as a Christmas greeting. Soon arrangements were made to bury the dead British soldiers whose bodies were lying in no man's land. The Germans brought the bodies over and prayers were exchanged.

The spirit of Christmas overcame the horror of war as peace broke out across the front. The Germans, who previously were viewed as demonized beasts by the British and French, almost always initiated it. This contact was followed by song. The Germans sang 'Die Wacht Am Rhein' and the British soldiers sang 'Christians Wake.' It was in many ways a miracle. Sapper J. Davey, a British soldier, wrote this in his diary. "Most peculiar Christmas I've ever spent and ever likely to. One could hardly believe the happenings." Hate, for a moment, disappeared along the Western front.

Another British soldier, Second Lt. Dougan Chater wrote, "About 10 o'clock this morning I was peeping over the parapet when I saw a German, waving his arms, and presently two of them got out of their trenches and came towards ours. We were just going to fire on them when we saw that they had no rifles so one of our men went out to meet them and in about two minutes the ground between the two lines of trenches was swarming with men and officers of both sides, shaking hands and wishing each other a happy Christmas." This continued for nearly an hour before their superiors ordered the men back to their trenches.

The powers to be objected to this display of humanity by the common soldier. For a brief moment, their gesture ended a war that the leaders of both sides would continue to fight for nearly four more years. Millions more would die, indeed many of the men who greeted each other would perish, but their spirits live on in history as an example to all of us.

We have much more in common with each other than the differences that divide us.

Peace is better than war.

Understanding is more important than division.