Imagination to a Tee 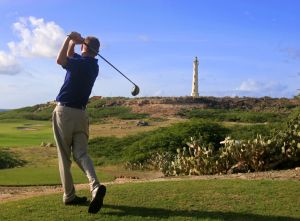 A golfer went to see his doctor. He was suffering from major stress syndrome. The doctor asked him if he played golf, to which the golfer replied, "I play at it, it's a very frustrating game, but I love it."

The doctor told him that the next time he played, he should use an imaginary ball. The golfer was a little embarrassed, but he decided to give it a try.

He went out on a weekday so his normal golfing buddies wouldn't see him, and proceeded to tee up an imaginary ball. Lo and behold, he birdied the first hole! He was playing the best game he had ever played, with birdie or eagle on every hole, as he approached the 9th green. Another single gentleman had been playing ahead of him and watching this game with much curiosity.

The first golfer explained that his doctor had told him to play a round of golf with an imaginary ball to relieve his stress, and it was working.

Well, of course, the second golfer said he had stress and asked if it would be all right to play with an imaginary ball, also.

The first golfer said "Sure!"

They now approach the 18th hole, short par 4, and both men are tied to this point in their round. The second golfer teed his imaginary ball, took a stroke, and started jumping up and down shouting, "Ace! I win!"

The first golfer only turned to him, smiled, and said "No, I won. That was my ball."