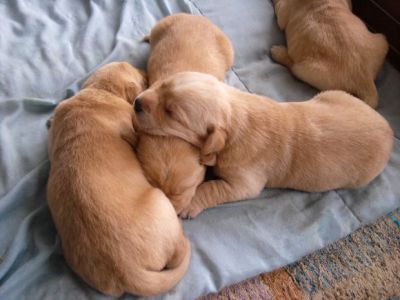 Bob Weber, past president of Kiwanis International, told this story. He had spoken to a club in a small town and was spending the night with a farmer on the outskirts of the community. He had just relaxed on the front porch when a newsboy delivered the evening paper. The boy noted the sign "Puppies for Sale". The boy got off his bike and said to the farmer, "How much do you want for the pups, mister?"

The boy's face dropped. "Well, sir, could I at least see them anyway?"

The farmer whistled, and in a moment the mother dog came bounding around the corner of the house tagged by four of the cute puppies, wagging their tails and yipping happily. At last, another pup came straggling around the house, dragging one hind leg.

"What's the matter with that puppy, mister?" the boy asked.

"Well, Son, that puppy is crippled. We took her to the vet and the doctor took an X ray. The pup doesn't have a hip joint and that leg will never be right."

To the amazement of both men, the boy dropped the bike, reached for his collection bag and took out a fifty-cent piece. "Please, mister," the boy pleaded, "I want to buy that pup. I'll pay you fifty cents every week until the twenty-five dollars is paid. Honest I will, mister."

The farmer replied, "But, Son, you don't seem to understand. That pup will never, never be able to run or jump. That pup is going to be a cripple forever. Why in the world would you want such a useless pup as that?"

The boy paused for a moment, then reached down and pulled up his pant leg, exposing that all too familiar iron brace and leather knee-strap holding a poor twisted leg. The boy answered, "Mister, that pup is going to need someone who understands him to help him in life!"