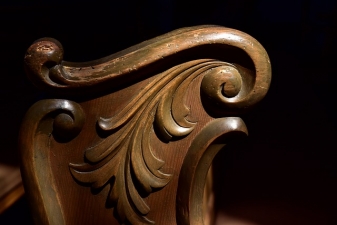 A rich man went to his vicar and said, "I want you and your wife to take a three-month trip to the Holy Land at my expense. When you come back, I'll have a surprise for you".

The vicar accepted the offer, and he and his wife went off to the Middle East.

Three months later they returned home and were met by the wealthy parishioner, who told them that while they were gone he had had a new church built. "It's the finest building money can buy, vicar," said the man.  "No expense was spared."

And he was right. It was a magnificent edifice both outside and in. But there was one striking difference. There was only one pew, and it was at the very back.

"A church with only one pew?" asked the vicar.

"You just wait until the grand reopening on Sunday," the rich man said.

When the time came for the Sunday service, the early arrivals entered the church, filed onto the one pew and sat down. When the pew was full, a switch clicked silently, a circuit closed, some gears meshed, a belt moved and automatically, the rear pew began to move forward.

When it reached the front of the church, it came to a stop. At the same time, another empty pew came up from below at the back and more people sat down. And so it continued, pews filling and moving forwards until finally the church was full, from front to back.

The service began, and the vicar started to preach his sermon. He launched into his text and when 12 o'clock came he was still going strong with no end in sight.

Suddenly a bell rang, and a trap door in the floor behind the pulpit dropped open.