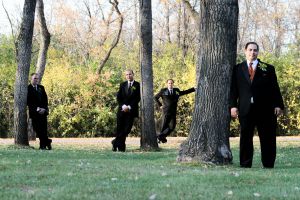 Note: Although this is test for men only and all "real men" answer "C" to all of these questions. Women will also benefit by reviewing them so that they get to understand men and thereby enrich their own lives.

1. Alien beings from a highly advanced society visit the Earth, and you are the first human they encounter. As a token of intergalactic friendship, they present you with a small but incredibly sophisticated device that is capable of curing all disease, providing an infinite supply of clean energy, wiping out hunger and poverty, and permanently eliminating oppression and violence all over the entire Earth.

2. As you grow older, what lost quality of your youthful life do you miss the most?

3. When is it okay to kiss another male?

A. When you wish to display simple and pure affection without regard for narrow-minded social conventions.
B. When he is the Pope. (Not on the lips.)
C. When he is your brother and you are Al Pacino and this is the only really sportsman-like way to let him know that, for business reasons, you have to have him killed.

4. In your opinion, the ideal pet is:

5. You have been seeing a woman for several years. She's attractive and intelligent, and you always enjoy being with her. One leisurely Sunday afternoon the two of you are taking it easy. You're watching a football game; she's reading the papers when she suddenly, out of the clear blue sky, tells you that she thinks she really loves you, but, she can no longer bear the uncertainty of not knowing where your relationship is going. She says she's not asking whether you want to get married; only whether you believe that you have some kind of future together. What do you say?

A. That you sincerely believe the two of you do have a future, but you don't want to rush it.
B. That although you also have strong feelings for her, you can not honestly say that you'll be ready anytime soon to make a lasting commitment, and you don't want to hurt her by holding out false hope.
C. That you cannot believe the Broncos called a draw play on third and seventeen.

6. Okay, so you have decided that you truly love a woman and you want to spend the rest of your life with her, sharing the joys and the sorrows the world has to offer, come what may. How do you tell her?

A. You take her to a nice restaurant and tell her after dinner.
B. You take her for a walk on a moonlit beach, and you say her name, and when she turns to you, with the sea breeze blowing through her hair and the stars in her eyes, you tell her.
C. Tell her what?

7. One weekday morning your wife wakes up feeling ill and asks you to get your three children ready for school. Your first question to her is:

8. When is it okay to throw away a set of veteran underwear?

A. When it has turned the color of a dead whale and developed new holes so large that you're not sure which ones were originally intended for your legs.
B. When it is down to eight loosely connected underwear molecules and has to be handled with tweezers.
C. It is never okay to throw away veteran underwear. A real guy checks the garbage regularly in case somebody, and we are not naming names, (but this would be his wife) is quietly trying to discard his underwear.

9. What, in your opinion, is the most reasonable explanation for the fact that Moses led the Israelites all over the place for forty years before they finally got to the Promised Land?

A. He was being tested.
B. He wanted them to really appreciate the Promised Land when they finally got there.
C. He refused to ask for directions.

10. What is the human race's single greatest achievement?